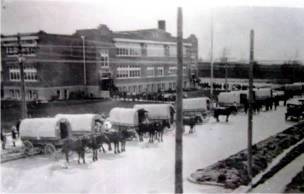 These school wagons resemble an old covered wagon. They had canvas tops and a door in and back. A slit in the door allowed for the reins to come through to the driver. The children entered through the back door which was equipped with a pulley and rope for opening and closing. The seats were along the sides and the floors covered with straw. Many quilts and even some horse hides were common equipment in the wintertime. Children often brought their own heated bricks and rocks during severe weather. A full load would have been around 14 to 16 riders. Two to four horses were used to pull the wagon. A barn was provided at school for the wagon and horses during the day. An hour and a half about the limit of the route. Discipline was easily maintained; any problem was quickly handled by inviting the offender to walk home. The wagons were replaced in 1929 with a 1020 Model A Ford truck chassis with a wooden body built in Twin Falls. The school is the Kimberly School built in 1916 and vacated in 2001.